As forex traders seek out stable investments that can hedge against inflation, market instability, and other geopolitical factors, gold has become more popular than ever. Traders can use gold as a way to hedge against other investments or as a safe haven that provides consistency over time and is more resistant to dramatic swings in valuation than a majority of other currencies.

Despite high economic inflation across the globe during the past year, gold prices have remained relatively weak. This phenomenon has left many wondering if the precious metal is still inflation-proof.

What Is Gold Trading?

XAU/USD is one of a number of gold pairings offered by forex brokers, making it easier than ever to incorporate gold as part of your forex trading strategy. The stability of gold prices over time also makes it an important asset during inflationary periods.

Following the impact of the COVID-19 pandemic on the global economy, foreign governments and savvy forex traders have moved more of their money into gold as a safeguard against losses resulting from current inflation. Economic practices such as printing more money can weaken global currencies, depreciating their value in relation to stable assets such as gold.

Gold’s stability is owed largely to its relatively fixed global volume, which can’t be dramatically increased in the same way that governments can print more paper currency.

Because trading gold is known to be stable in shaky economic times, it’s considered a favorite among traders who want to protect themselves from a volatile market or inflation. This means gold traders tend to focus on more long-term market trends. Meanwhile, forex traders are typically focused on short-term market activity.

The Value of Gold

When it comes to capital and commodities, gold is considered one of the most popular precious metals to invest in. Why? Gold can help investors diversify their portfolios, which is especially important during times of economic uncertainty. Although the gold market may also appear volatile at times, it’s long been considered a safe haven across numerous countries and markets.

What Are Gold Futures?

Futures contracts are legally binding contracts that are bought and sold on exchanges. A buyer purchases a certain amount of a commodity at a predetermined price on a specific date, while the seller agrees to let the asset go under those predetermined conditions.

Gold futures work like any other futures contract. They require buyers to purchase and receive a certain amount of gold at a specific price in the future, while a seller is required to part with that amount of gold at that time.

What Are Gold Options?

Gold options are derivatives that utilize gold or gold futures contracts as underlying assets. This type of contract is a contract between two separate parties to simplify a possible transaction on a certain amount of gold. The options contract includes the precious metal’s predetermined price, or strike price, along with its expiration date.

Call options on gold allow the person who holds the contract the right to purchase the metal at a predetermined price before its expiration, while put options grant the right to sell.

Learn more about the advantages of trading gold, spreads and swaps on gold, technical analysis on gold, and more in this webinar!

How Do I Get Started Trading Gold?

If you’re eager to make better use of gold and capitalize on potential profit opportunities, here are nine trading tips to keep in mind:

1. Day trade with the New York close in mind.

Trades during peak activity offer high liquidity and low volatility, making them good targets for safe-haven positions. However, off-hours trading can provide the extra volatility needed to execute scalping strategies. At the same time, this extra volatility increases the relative risk of any trade.

Because XAU/USD tends to trade in a range, one of the easiest strategies is to identify buy or sell opportunities within previous highs and lows for the trading pair. Traders can open a position on gold when it’s trending up, for example, and target a previous high as their sell price, or vice versa.

Gold is a relatively stable asset, making it likely to reach these previous highs or lows over time. However, this isn’t a good strategy for day trading because it can take time for these targets to be hit. Range-bound strategies typically don’t offer quick profit opportunities like momentum strategies do. Still, it’s a relatively low-risk strategy designed to generate some profit from reliable XAU/USD price movements.

When political or economic uncertainty creates concerns about currency prices, gold can be a stable safe haven that protects your liquid assets.

Gold tends to be strongly correlated to the U.S. dollar as well as other stable currencies such as Japan’s yen, and opening a position with XAU/USD can be a reliable means of protecting your assets from unpredictable situations affecting other forex markets.

4. Use the symmetrical triangle for analysis.

The symmetrical triangle is a simple chart pattern that indicates a period of consolidation that may lead to a price breakout. Symmetrical triangles feature the convergence of two trend lines progressing at a similar slope but in opposite directions. As consolidation takes place, price movement on the pairing grows tighter, creating a potential trading opportunity on a breakout.

A stop-loss order can be placed just below the descending trend line after the two trend lines converge, and sell orders can be issued in the event that the price of XAU/USD successfully breaks out.

Increased market demand for gold can affect prices due to the fixed global supply of the material. Demand can come in multiple forms. Certain industries may increase their acquisitions of gold due to the material’s role in consumer projects. Both the medical and tech industries, for example, use gold in certain products and solutions.

Consumer demand for gold jewelry can also affect prices. Consider global demand in foreign markets where gold jewelry is considered both a luxury good and an investment asset.

Central banks tend to buy gold as a hedge when they’re anticipating volatility in certain currencies. Recently, for example, China and Russia made headlines for making significant investments in gold, which reflected their concern about the future price of the U.S. dollar and the euro, among other major global currencies.

When central banks start buying gold in large amounts, it tells forex traders two things. First, governments are operating out of a belief that major currency values may dip, which could encourage traders to move a greater percentage of their investments into less volatile funds.

Second, increased central bank buying typically causes an increase in the price of gold—at least in the short term. If gold prices start trending up, it could be an opportunity to turn a quick profit.

Historically, gold prices tend to rise when the real interest rate dips below 1%. By watching this interest rate as it changes over time, you can identify a strong buying opportunity—especially if you’re looking for long-term trading opportunities. In the past few years, gold mining hasn’t seen any dramatic shifts. It’s not necessarily related to a stagnant demand for gold: Although gold is in demand and has seen overall mining production increase over the past decade, today’s gold mining efforts face higher costs due to the challenges of accessing underground gold reserves in hard-to-reach places.

The most accessible gold reserves—at least the ones currently known—have already been mined and placed into the global supply. The remaining gold reserves represent much more expensive mining operations, which decreases profit potential for mining businesses.

But limited production isn’t a sign that gold is poised for a decline. In fact, the opposite is true: Stable gold production could put the squeeze on global demand and lead to higher prices, especially if central banks and other common buyers of gold start seeking out this asset.

Forex traders should consider XAU/USD as a reliable safe haven for their investment activity as well as a potential profit source if they can effectively analyze gold’s price movements and develop a trading strategy to capitalize on this opportunity.

Watch our 1-hour webinar to
learn more about trading gold: 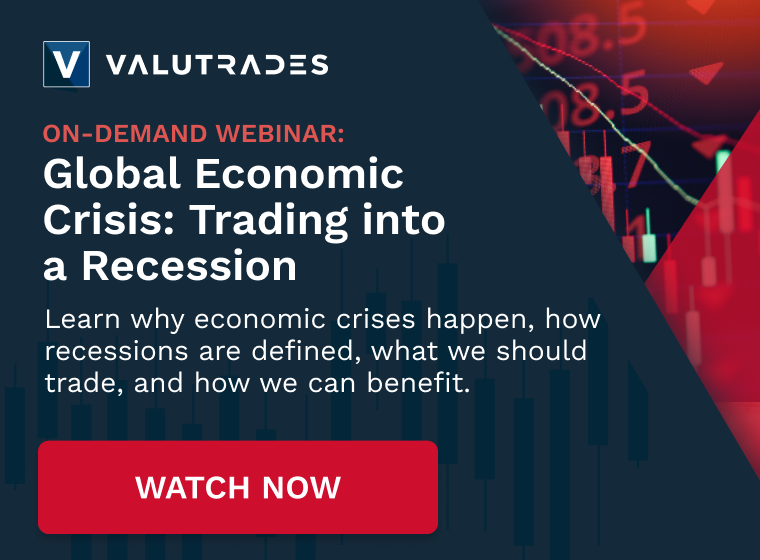