Tips for Trading in an Inflationary Environment With the U.S. economy experiencing inflation at rates not seen since the 1980s, forex traders are monitoring the U.S. dollar closely to see how the currency’s purchasing power and exchange rates are influenced by the accelerated devaluation of the U.S. dollar.

At the same time, U.S. regulatory efforts to curb inflation are already underway. Meanwhile, currency values continue to be roiled by global events such as the Russian invasion of Ukraine, global gas shortages, and lingering economic disruption caused by the pandemic.

While inflation needs to be balanced among other economic forces, this rapid rate of inflation deserves the close attention of forex traders. Here are some tips to help you weather the challenges and preserve your capital when trading in an inflationary environment.

As inflation reduces the purchasing power of the USD and other major currencies, it sometimes creates new opportunities to preserve your capital and even generate profits by moving funds into currencies from developing economic markets.

Many forex traders—particularly less experienced traders—may be unfamiliar with these currencies and may struggle to identify promising investment opportunities on their own. In general, the best trading opportunities among developing economies and currencies will be ones that offer high yields, regular price volatility, and suppressed pricing relative to the USD—which could set up a price swing as the U.S. dollar’s value declines.

When evaluating opportunities for trading in an inflationary environment, there’s a difference between unrestrained inflation and inflation that is being managed and addressed through economic controls.

The efforts being employed by the U.S. Federal Reserve to slow inflation in America, for example, are managed inflation, which creates short-term economic concerns but does not drastically alter the long-term prognosis of those currencies.

Although the near-term volatility and price decline of the U.S. dollar are far more relevant to many traders than the long-term forecast of the currency’s value, traders should also be mindful that, at least historically, these larger currencies tend to balance themselves out over time.

Buy currencies when their purchasing power is low.

When inflation does play a leading role in reducing the purchasing power of a currency, this can represent an opportunity to buy low and cash in as the currency’s economy begins to slow down.

Similarly, the value of GBP declined significantly after Brexit was finalized. More than five years later, the price of GBP remains significantly lower than its pre-Brexit levels. This can create a promising trading opportunity if traders identify other indications of a possible bounceback in GBP’s value.

Don’t ignore other factors that can affect currency exchange rates.

While inflation can have a significant influence on exchange rates for currencies, inflation never occurs in a vacuum.

Even during an inflationary period, exchange rates are subject to influence from a wide range of factors, which could result in exchange rates not always matching the indications of inflation. These factors include:

Inflation can disrupt financial markets and your forex trading plans, but a good trading strategy will be able to account for inflation when identifying and seizing upon promising forex opportunities. By taking inflation into consideration alongside other economic news, technical indicators, and other relevant forex research, any trader can adapt to evolving conditions and continue reaping profits when trading in an inflationary environment. 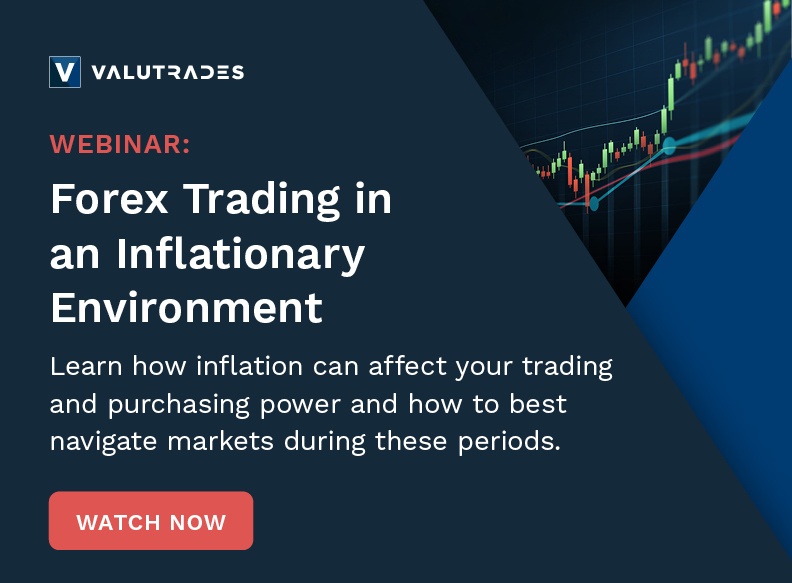